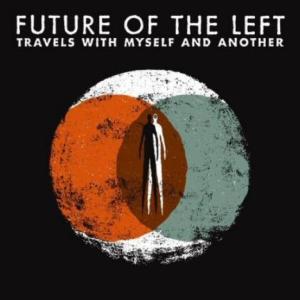 Album Review: Future of the Left
Album: Travels With Myself and Another
Label: 4AD

Formed from the ashes of the equally great bands Jarcrew and Mclusky, Future of the Left are now pushing forward with their desires to be a band on their own merits, and not those of the (admittedly awesome) past. Their last album passed many by, which is a shame given that its oddball sequences and sardonic lyrics from Andrew ‘Falko’ Falkous created a package of unique and fresh rock music. However, with a live show that has (as far as I’m aware) never failed to blow the audience away, and an already dedicated fanbase from the old days it’s time for Future of the Left to truly cement their sound and find a broader audience.

Listening to the album is an almost sordid affair at times. Kelson Mattias’ bass is something that would make Nick Oliveri weep, typically all-consuming as it immerses the tracks in a black hole of grimy grooves. For the most part the bass takes precedent over the over instruments (apart from Falko’s voice, more on which later), becoming the paper upon which the rest of the music is written upon. Take ‘I Am Civil Service’ for example: a pounding bassline flexes up and down, before the other parts are laid over the texture, but that bassline is always there at the spine of the track.

Things are certainly not as light-hearted as the atmosphere on debut ‘Curses’. For the most part Falko sounds incredibly hot and bothered, not afraid to scream his vocal chords out on the likes of ‘Arming Eritrea’ and there’s a notable resistance to the bands having any fun. In some respects it’s a shame, as there less of the quirky moments that made Curses a bit of a laugh to listen to, but their darker focus has encouraged the band to write succinct tracks that pack a weighty punch. Typically tracks start off light hearted, then delve into angrier depths once the first chorus is out of the way. ‘Land of My Formers’ begins in such a way, full of a whirlwind of guitars before Falko ends up screaming his heart out with admirable chagrin.

It’s in Falko that the band has found their ultimate unique selling point. Without his cryptic (maybe nonsense, depending on your upbringing) lyrics and their delivery he’s quickly cementing himself as one hell of a frontman. From the terrace-inspired chanting of ‘You Need Satan More Than He Needs You’, via the fast paced vocal antics of ‘Drink Nike’, to the spoken word last track ‘Lapsed Catholics’, in itself a pummelling finale in which Falko’s lyrics become much more see-through, name checking the likes of Rupert Murdoch and the Catholic church in a tongue-in-cheek, yet still negative light.

So what have FotL achieved with their second album? With a pretty difficult fanbase to please (live the band are constantly requested to play ‘Lightsabre Cocksucking Blues’, an old Mclusky track) and a clear determination to get as far away from their former selves they’ve cleared out a sound for themselves here. Dark, and yet still laced with humour and wit, ‘Travels…’ is one of those albums that at first seems completely insignificant, yet after a few listens it buries itself deep within your subconsciousness, constantly dragging you back for another go. It’s not perfect, but given time and you can see that this is the kind of band that are going to only get better and better.

One thought on “Album Review: Future of the Left”