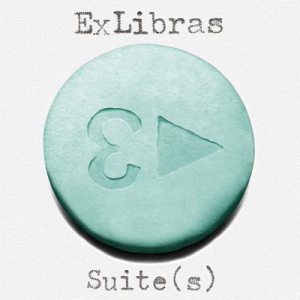 Last year James May, the fuddy-duddy oddball who cannot comprehend the concept of women, from Top Gear published a book. ‘James May’s Magnificent Machines: How Men in Sheds Changed Our Lives’ has a pretty solid five star rating on Amazon, with praise from four reviewers who also struggle with the idea of breasts.

Now, I haven’t actually read ‘James May’s Magnificent Machines: How Men in Sheds Changed Our Lives’ but I’m fairly sure that the foppish haired oaf has a missing chapter, and it’s called Ex Libras – ‘Suite(s)’.

“What has James May got to do with this band I’ve never heard of?” I hear you exclaim pedantically. Well, nothing really. But ‘Suite(s)’ second jaw-dropping moment after hearing the album is finding out that the band recorded it in a normal garden shed. The only way this could be more of a D.I.Y release is if they’d built the shed beforehand. So one thing’s for sure – Ex Libras don’t particularly play by the rules.

It’s the reckless experimentalism that gallops amok throughout the album that makes it so refreshing and unique to listen to. Ivories are tickled to tingle the spine in ‘Audio Video Disco’; the opening segue from ‘Issue’ into ‘Underachiever’ is beautiful; as is Amit Sharma’s disparaging vocal sighs throughout the record.

It’s almost like being back at the beginning with Radiohead again. Now admittedly, that’s a comparison that is thrown about more often than a minor in Haringey, but here I think it stands. The band harness progressive experimentation alongside more traditional, understandable elements. ‘Sum Numbers’ is a perfect example: a lush piano line uncoils into surreal vocals and a solid drum beat before concluding with a crunching riff and all sorts of electrical whizz-bangs shooting out everywhere.

‘Suite(s)’ is essentially a recipe that has been mixed to perfection. The brooding guitar melodies have a hint of Oceansize about them, the electronics call on 65daysofstatic, and Sharma’s voice takes a few cues from Thom Yorke and James Walsh throughout. There’s even a pinch of drum ‘n’ bass about Ross Kenning’s drum beats.

Ex Libras’ do it yourself debut is an enrapturing treat. Aurally arresting, it’s certainly one of the best things I’ve heard this year, and with the right kind of nurturing the band could reveal themselves to really stand amongst the likes of British legends such as Radiohead. Not bad for three chaps toiling away in the shed, eh?