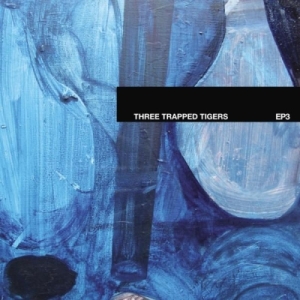 Three Trapped Tigers are doing things their own way. Having already put out two solid releases in the forms of 1 and 2, the band is now flowing at full momentum, with the successive release of (can you guess?) 3.

With the sheer proliferation of rock groups evolving out of electronica-inspired primordial ooze (hello Fuck Buttons, Battles, 65daysofstatic) it appears that this is a rich seam with plenty of treats to offer. Three Trapped Tigers have their own take on the combination however.

3 comes across a lot more robotic than the band’s previous exploits. It doesn’t feel very organic, rather like the band has delved further into the Aphex Twin/Autechre fold, eschewing their use of more traditional rock instrumentation and trading it in for glitch-ridden rhythms and melodies.

Despite its cold exterior however, the EP has more than a hint of human soul to it. Tom Rogerson’s vocals air gracefully over the likes of ‘10’s mathematically pronounced rhythm work, while ‘11’ takes things back a bit with a healthy dose of slamming guitars and rising ynths that would make any Game Boy music coder proud.

That’s not to say the band is tunnelling down a one way street. ‘13’ is possibly the most evocative piece Three Trapped Tigers have created to date. Its gentle melody washes over a rumbling tide of taut percussion, and its comparative briefness makes it shine in a way the more prolonged tracks can’t. It’s just seems a bit of a shame that there isn’t more of this exhibited in 3’s brief running time.

Excluding ‘13’, the one trouble with this EP and arguably most of Three Trapped Tiger’s output, is that it is difficult to connect to. The melodies are agreeable, but often very forgettable, and the robotic rhythm section gives the music a rather flat sound. Compared to Battles, which is inevitable, they lack a certain sense of dynamism and fun, instead treading a much duller path. However, with this comparison in mind, Three Trapped Tigers are a band with a great deal of potential. Battles’ first few EP’s were vastly different from the sound they eventually grew into on Mirrored, and there’s a good chance that Three Trapped Tigers are just experimenting with what they can do in this field. With a little bit more heart the Tigers could be onto something very big, but these things take time.

Originally published at The Line of Best Fit