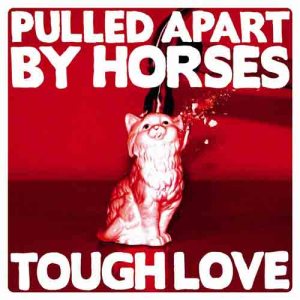 Somewhere, buried deep within a cupboard which is rarely blessed by daylight, I have a hand-drawn comic created by the lads from Pulled Apart By Horses, picked up all the way back in 2009. It’s a little reminder of the hard graft that the lads from Leeds have put into their art; an effort that has been well rewarded with the rapturous reaction to live shows and the healthy dose of radio coverage that they’ve received to boot.

That radio producers have become enamoured with the band is another sign of how special they are. While comparable bands are left to late night shows at best, Pulled Apart By Horses have made their presence felt on the daytime schedules – suggesting they are the perfect soundtrack for any disgruntled office workers ready to punch their bosses in the throat.

But has the band been forced to trade some of the haywire pandemonium that so dominated their debut album to get this far? Not at all. If anything, Tough Love has taken the madcap formula of the first and turned it up to 11.

Opener ‘V.E.N.O.M’ takes cues from Leeds compatriots Hawk Eyes – that is, a finale that sees singer Tom Hudson yelling each letter of the song’s title with a rasping anger (akin to Hawk Eyes’ ‘Kerosene’). Play it loud enough and you’ll be forgiven for thinking you can see Hudson’s spittle flinging out the speakers.

You can tell this is a band that has forged a sound through tireless touring. ‘Epic Myth’, with its tight twists and turns and eccentric vocalisations from Hudson, is a massive statement of confidence in ability that was perhaps lacking on the debut. The paranoid intro to ‘Degeneration Game’ shows how the band have learned to rely less on Hudson’s yapping for emotion, and the haunting guitar wails on closing track ‘Everything Dipped In Gold’ give the album an eerie conclusion – a stark contrast to the call to arms that ended their debut.

If there’s one criticism to level at the album, it’s that it just fails to encapsulate what a phenomenal force PABH are in a live setting. That’s not a massive surprise considering this is a band that has relied on a fair share of the taxpayers’ money in NHS care. Without the accompanying bodies, hair and instruments flying everywhere in a pool of sweat and blood, Tough Love does struggle to keep things interesting over its surprisingly brief running time.

“When I was a kid I was a dick/But nothing changes/Threw myself around ‘til I was sick/But nothing changes” shreds Hudson on ‘Wolf Hand’. Despite his aggrieved delivery, it’s startlingly poignant. When The Line of Best Fit spoke to drummer Lee Vincent as the band gallivanted across the UK for their first headline tour, he told us that growing old is an ever-present concern. But Tough Love is evidence that there is no need to panic. Pulled Apart By Horses continue to be a devastating whirlwind of energy and it looks like they have plenty of that energy left to continue for a while yet.

Originally published at The Line of Best Fit.