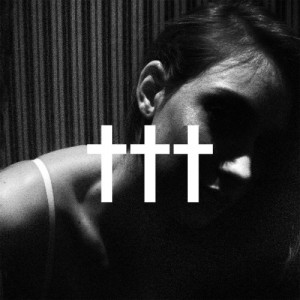 ††† – or, for the sake of our collective sanity – Crosses, is yet another side project starring Deftones’ Chino Moreno. This time he teams up with Far guitarist and childhood friend Shaun Lopez and producer Chuck Doom for a project that does no harm to his reputation as one of the most diverse and creative survivors of the 90s rock and alternative music armageddon.

Crosses ruffled feathers early on when Lopez proclaimed Moreno – who demanded a slice of the hometown action – now had his very own witch house band. It’s a term that may be unfamiliar to some; a quick explanation cribbed from Wikipedia describes it as an “occult-themed dark electronic music genre”. On that basis, the genre certainly rings true with the album’s haunted house tone, not to mention the cult-like following Moreno no doubt inspires in those that grew up in nu-metal’s heyday.

The opening salvo sees the band at their most comfortable and, consequently, most accomplished. A staccato drum beat opens up proceedings on the ethereal “This Is A Trick”, a medley of drawn out bass fuzz and Moreno switching between plaintive croons and that trademark snarl of aggression like an irritable kitten being bribed with catnip. “Telepathy” grinds with a kinky lasciviousness that wouldn’t sound out of place on the 16-bit explicit rampages in Hotline Miami, Moreno hazily tempting his target to “come play my game”.

There’s a real sense of place throughout, every song a pop-in visit to a different tomb within a house of horrors. The sci-fi trills of “Thholyghst” sparks the imagination into vivid images of countless 90s cyberpunk dystopias. There’s no doubt the gloomy mood that pervades owes plenty to the seminal work of Nine Inch Nails, but where Trent Reznor’s voice was almost internal thoughts bubbling over, much of the melody from Crosses is channelled through Moreno’s well-worn pipes, which flux between intimacy and soaring exhibitionism with nary a flicker of effort.

Around the release of Crosses’ first two EPs, a lot of the band’s talk focused on the freedom of not having to shoulder the preconceived expectations that are found their aforementioned projects. That results of that attitude shine through here, where there are moments when the Crosses ‘sound’ is abruptly distorted for something completely different. Take “Option”, which brings Lopez’s guitar to the frontline in a rousing rock-pop rabble, proving Crosses to be more than a one trick pony. The Crosses sound seems set in stone, but there are times when the band goes all-in with a different angle. Hell, I’ll even swear blind the minimal guitar work on “Trophy” has a hint of Spandau Ballet’s “True” to it, and it’s bloody fantastic.

Even “Blk Stallion” and its borderline-cheery guitars which just about manage to avoid sounding too crass and sweet buried amongst the album’s overcast atmosphere, stands as another example of a collection of mates going back to their roots and experimenting with their music for no purpose other than their own enjoyment.

If anything, Crosses’ biggest issue is one of oversaturation. Clocking in at 15 tracks and the length of your average Scandinavian drama, Crosses can’t help but fall victim to outstaying its welcome. Exaggerating this malaise is the fact that 10 of these tracks have already appeared on two well-received and widely distributed EPs making this debut full length seem more of a compilation that has been peppered with new tracks.

But, for the majority of its running time, Crosses is a slow, steady and comforting listen, very rarely raising above anything more than a laid back ebb and flow. This isn’t a criticism – it’s nothing short of rapturous to hear an electronica-fused album which doesn’t feel the need to press the ‘MORE BASS’ button in this age of ‘-step’ appended genre bastardisation.

Crosses is another successful experiment for Moreno and, as the band intended, one that has grown into its own creature organically. If you haven’t had the chance to look into what Crosses are doing and you have no personal, irrational hatred towards an under-the-spotlight Chino Moreno, then it’s well worth having a look. Those already with the EPs may be better served waiting to see where else this side project goes.