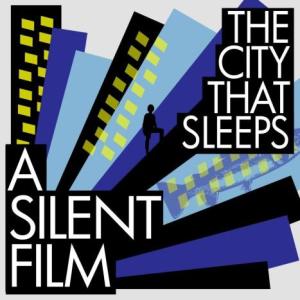 The first time I encountered Oxford’s A Silent Film I was in the middle of nowhere, hungover as fuck and wishing I’d brought some wellies to the rain drenched 2000 Trees festival. Back then, with a swimmy head and a leathery tongue, they were just the right kind of band to grace the stage with their simple and melodic tunes that took more than a fair share of hints from the likes of Coldplay and Keane, whilst holding it all together with an integrity saving dollop of Radiohead inspiration. END_OF_DOCUMENT_TOKEN_TO_BE_REPLACED

We woke up early Saturday morning, and I made a bold attempt to shrug off the nagging hangover that had embedded itself into my head. A quick poo in some extremely stinky toilets and a thorough brushing of teeth had me ready to go for the rest of the day. Unfortunately, the damp weather continued to persist throughout the day, and it didn’t look as if the sun was going to be drying that mud anytime soon. 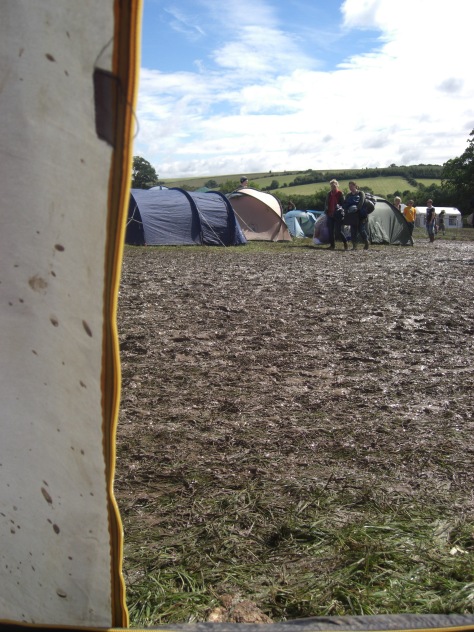 The view from the tent in the morning was ominous at best.

The first band on the mainstage were The Divebomb Revolution, winners of a local battle of the bands competition whose prize was to wake up all the other festival goers who hadn’t quite crawled out of their tents yet. The trouble was, I’m not too sure bombastic prog rock in the style of Dream Theatre can really be fully appreciated at such a tender time. Although showing a great deal of promise, the band really seemed to lack the ideas and talent to follow in the footsteps of their blatant idols, and came across as more style than substance.

So we headed over to the Leaf Lounge, 2000 Trees’ intimate tent that was hosting all of the acoustic acts of the weekend. And when I say intimate, I mean it. As we arrived the tent was pretty packed out, with listeners sitting as close as possible on the ground in front of the stage, as young starlet Natalie Ross walked out to perform her set. If I thought that The Divebomb Revolution were over the top, then Ross was about to show a whole new realm of overbounding enthusiasm. Constantly chattering about how unique she was, her seemingly desperate need to be accepted as a kooky individual fell apart as she pleaded for her audience to appreciate her ‘angle’ at the music industry. Furthermore, once she had eventually stopped talking, her songs were sung with a smug croon that didn’t settle too well on my ears, and just came across as a bland attempt at being ‘different’. I certainly wasn’t a fan, and left pretty early into the set, as she continued to talk about an alcoholic boyfriend or something. 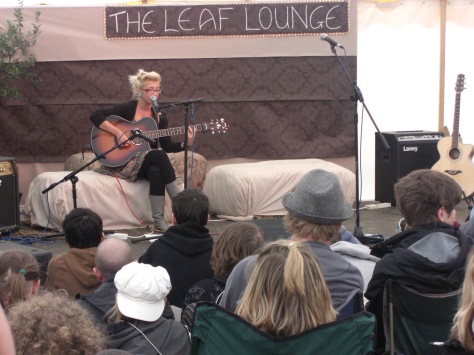 Natalie Ross embodied everything that is wrong with the kooky indie scene.

Returning to the main arena to grab something to eat from the fantastic Pie Minister, purveyors of one of the greatest festival pies I’ve ever eaten, A Silent Film were entertaining the audience with an engrossing, ethereal sound that sounded akin to the likes of Editors and Coldplay, although that description really doesn’t do them justice. It was wonderful music to just sit back and relax to, pint in hand. They certainly have the talent to breakthrough to a bigger audience, and were very enjoyable.

After this it was back to the Leaf Lounge to get an early spot for the late announcement Chris T-T. As we arrived local boy Dan Heaver was playing up to the crowd with a catchy collection of vocal melody driven songs, that had the audience chanting along. Considering I’d never heard of him before I was really impressed by how he had them eating out of his hands, even warranting an extra song as the organisers frantically tried to hunt down the now missing Chris T-T. 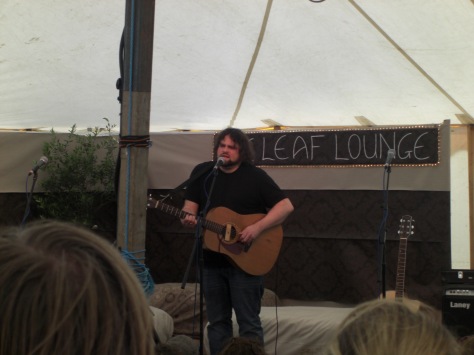 Despite his late appearance, Chris T-T did a stellar job of wowing the crowd.

Eventually he was found, and had no problem in enthralling the crammed tent with his overtly political lyrics, reciting his brilliant poem midway through the set to a silently enraptured audience. Despite a set cut short, he didn’t lose any of his power, and his themes of deforestation and anti-war struck a chord with the predominately tree hugging crowd.

Later on in the day and The Anomalies took to the stage, a loud and brash band featuring turntables, rappers and riffs. I was under the impression nu-metal was well and truly dead to the world, but given the hyperactive antics of the two MC’s, whose livewire freestyling took to the ears like a rusty cheesegrater.
Things did not overwhelmingly improve with the follow up act, Imperial Leisure. Given my distaste for ska music in general, I was not likely to enjoy their forcefully upbeat horns, but even I couldn’t help but get a wry smile out of one of the vocalists looking completely out of place, his white shirt and gold watch standing out a mile from the ragged clothes of his counterparts. 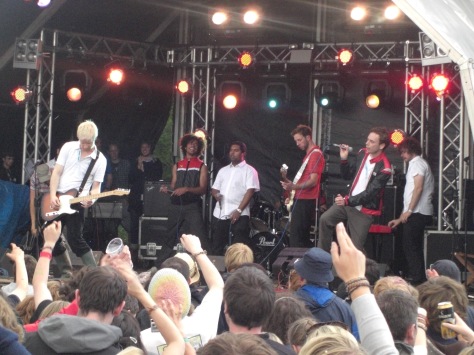 Imperial Leisure were…well, certainly nothing akin to what their name suggests.

Given how 2000 Trees has handed a lot of its bragging rights to Frank Turner‘s endorsement and appearances at the festival, there’s no surprise that there is a remarkable amount of expectation from the main stage’s largest crowd yet. Unfortunately the miserable weather only added to what seemed to be a rather uninspired performance, a shame considering how much I have enjoyed his shows in the past. 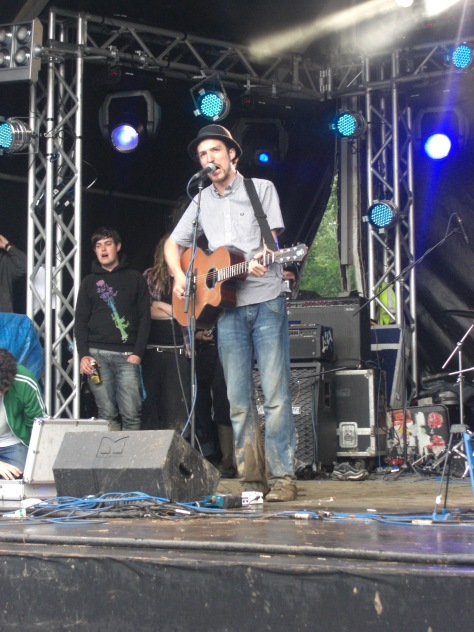 Just like the weather, Frank Turner was a bit of a disappointment.

However, my personal indulgence this weekend was to be Future of the Left. Having been waiting to see them since getting a hold of their fantastic debut, the whole weekend had been building up to this moment. It was just as well then that their performance did not disappoint. Falkous’ screaming tore the sun out of the clouds, and bassist Kelson Mattias put on a brazenly riveting performance, teasing and toying with the disappointingly empty crowd. After this onslaught, I could only just about manage to hang around for a few of These New Puritans‘ tracks. Given the gradually rising furore being made over these guys I was expecting a lot more than the staid and painful techno infused noise, and the repetitious vocals only grated. 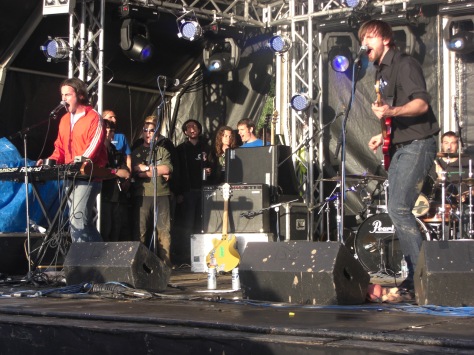 Future of the Left were fucking awesome. End of.

It was up to headliners Art Brut to close off the weekend’s frivolities, and despite technical problems that saw their set cut ludicrously short, frontman Eddie Argos kept the show going with an impromptu juggling performance, and once the music started a highly enjoyable set that dashed through some of their more popular hits (I gather the band have quite a following in Germany, and certainly deserve a few more admirers on their own shores).

And therein did the weekend end. A hectic ride home and a brief shower and all I’m left to say is that 2000 Trees was a fantastic example of how to go about making a festival about the music. The weather was diabolical, some of the food was questionable, and getting there was an upheaval, but I can honestly say that the charming atmosphere and great fresh talent made it more than worthwhile. I just hope that next year things remain 2000 Trees, and we don’t begin to see another passionate event ruined by greed which could see it turn into 4000 Trees or more.