If 2012 is the last year we have on this planet, then at least the musicians are helping us go out with a bang. Over the past few days a spate of reunions have been announced, including the ‘always rumoured, never happening’ reformations of At the Drive In and Refused. END_OF_DOCUMENT_TOKEN_TO_BE_REPLACED

Now we’ve had our say on the matter, let us know what your top ten of this year were and why by leaving a comment.

1. Future of the Left – Travels With Myself and Another (4AD)

What is it that makes an album great? Is it the album’s power to overcome the lowest of emotions and leave the listener feeling changed? Or is it just a collection of great songs that fit together and don’t overstay their welcome? Whatever the science behind the standout albums of the past decade, ‘Travels With Myself and Another’ has it in spades. Future of the Left have got their own stories to tell about how they got to this album, stories that involve innovative and unique bands that made the slightest mark on UK music (Mclusky and Jarcrew), stories about how they confronted the demon of piracy and got nowhere and stories of hundreds of sweaty, tiny shows playing their hearts out. It’s been a long journey, but ‘Travels’ is the album that Future of the Left have been training to make for all those years.

It’s undeniably quirky, poking fun and toying with the state of the world rather than just having a whinge. Singer Andrew Falkous continues to sharpen his wit razor and slice into a variety of wry topics. But the music that stands behind him is just as cutting. From the military exercise of ‘The Hope That House Built’ to the football terrace-influenced chanting of ‘You Need Satan More Than He Needs You’, everything here is just ripe for euphoric shouting along, pulling the listener out of any mire.

There’s no doubt that Future of the Left have more to offer. Without a doubt they are one of the, if not the, best band in the UK at the moment. Something entirely different, something clever and emphatic, it’s no wonder they haven’t found the sunny climes of stardom like Biffy Clyro and Elbow. But maybe that’s for the best: after all, what would Future of the Left have to be angry about if they have everything?

(Read the full review for Travels With Myself and Another)

This is part three of The Only Thing I Know For Sure’s Top Ten of 2009. Parts one and two can be found here and here respectively.

Mental. Absolutely bloody mental. That is literally the only word you can use to describe this Oceansize offshoot. Five months old and it’s still completely incomprehensible, and if you picked up the copy of the album laden with DVD bonuses then you know just how mentally damaged the Kong trio could possibly be. Imagine if David Lynch decided that instead of making films, he’d go into music instead and you might be near to describing the gibberish here. Still, what they have in psychological illness they combine with an album full of off-kilter riffs and eccentric ‘singing’. Really, if you need one odd album in your collection to test your friends’ mental solitude, it’s this.

At this point it’d be nigh on impossible to suggest that Every Time I Die can do any wrong. ‘New Junk Aesthetic’ is yet another stellar album from a stellar band. By now the basics are set in stone, but ‘NJA’ adds the extra layer of polish on the ETID sound to make it an unavoidable treat. The riffs come thick and fast, their groove matched with that sultry Southern tinge that leaves you longing for a sweaty mosh pit in Buffalo and Keith Buckley reasserts his position as one of the best metal vocalists of the decade, with the kind of delivery that can bring down mountains. A band at their zenith? Hopefully not, but at this point even a shit ETID album is better than most of the stuff that passes for rock these days.

Talking about bands at their zenith, Static Tensions is the album that Kylesa have been promising to make since their 2002 self-titled debut. To anyone who baulks at the idea of girls in rock, I dare you to explain your position to the delightfully named Laura Pleasants. The fact that if you didn’t already know she was in the band you’d have no idea that you were listening to a female roar her lungs out is compliment enough to her devastating performance. But that’s not all that makes ‘Static Tensions’ one of the standout albums of the year. The furious ensemble of two drummers rumble like a herd of blood-crazed bison, and the constant evolution of every song on this album lead to a mesmerizing experience for the years. Kylesa, welcome to the big league. Girls allowed.

The second part of The Only Thing I Know For Sure’s top ten of 2009. Part one can be found here. 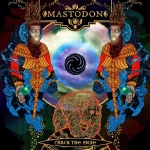 Bombastic and pretentious, this year Mastodon reinvented themselves. Crack The Skye at times beggars belief, the band pulling musical tricks out of their sleeve that nobody saw coming. It’s debatable whether this is their best album yet, but without a doubt it shows that Mastodon are so much more than a skilled thrash band with a few ideas – they’re happy to pioneer and mix up genres that have no right to belong together. The fact that they then went on to play these songs to perfection when they visited the UK this year just cements the fact that they are one of the best things ever at the moment.

Ok, so let me be honest – this is the first Thrice album I’ve ever listened to. Shocking yes, but maybe it wasn’t such a bad start. Those fans fonder of their earlier sound seem somewhat disillusioned with this effort, but I sure as hell don’t understand where they’re coming from. Beggars is such an intricate piece of work, and a powerful release for vocalist Justin Kensrue’s troubled mind, that it demands attention and respect. Certainly one of the most affecting albums of the year, and not just because of its melancholic reflections on belonging and faith – Thrice still take care to rock out as hard as ever.

This one came completely out of the blue, but it is something incredibly special. When I reviewed it, I had to rely on that journalistic crutch of comparing Ex Libras to Radiohead, a compliment that sometimes seems the only one music writers can conjure in order to make a new band sound important. But I stand by my favourable comparison, as ‘Suite(s)’ mixes the intelligent experimentation of ‘Kid A’ with more basic elements, such as a stunning vocal performance from Amit Sharma. A remarkably impressive debut, what makes it more exciting that this is a band at the very beginning of their musical career. And even Radiohead started shite, so imagine what this lot are capable of?

(Read the full review of Suite(s))

Ho ho ho, yet another top ten of the year that no-one cares about! Nevermind the numbers, these ten albums are a combination of what has amazed me, and what sums up what the year has brought us. Looking at my original reviews, it’s funny to see how my appreciation for certain albums has developed over the year, proving just how fickle and delicate such a thing as a review can be. I could have made a longer list, and certainly haven’t heard everything that 2008 offered, so maybe in about five years time I can come to some proper conclusions…in the meantime, have a look at what I liked, and then tell me what you liked. END_OF_DOCUMENT_TOKEN_TO_BE_REPLACED

The music industry is in tatters. Every week there are ever more depressing reasons to give up hope on the music world altogether. CD sales are falling faster than Icelandic bank stocks, big wigs with stupid names are sitting at the boardrooms of the most powerful labels in the world, and Saturday night talent contests exploit the young and the beautiful, only to leave them on the side of the road with nothing after a year. That’s before we even consider the knock on effect of that ghastly label ‘the credit crunch’, causing music labels to fold and young artists to disappear in a sea of debt. Is it any surprise that Slipknot, those purveyors of doom and gloom for unloved teenagers across the globe, named their last album ‘All Hope Is Gone‘? END_OF_DOCUMENT_TOKEN_TO_BE_REPLACED

A little while ago I wrote a review for Elbow‘s third album, The Seldom Seen Kid. I doubt anyone read it, and at the time of publishing noone really gave a shit about who Elbow were. Perhaps the album should have been called The Seldom Seen Band. But, the moment the band won the Mercury Music Prize (and fair play to them, the album was perhaps the worthiest amongst the other shite nominations) the band have become The Only Band That You Should Play Or Use In Your TV Programmes Or Adverts. END_OF_DOCUMENT_TOKEN_TO_BE_REPLACED

The Only Thing I Know For Sure
Create a free website or blog at WordPress.com.