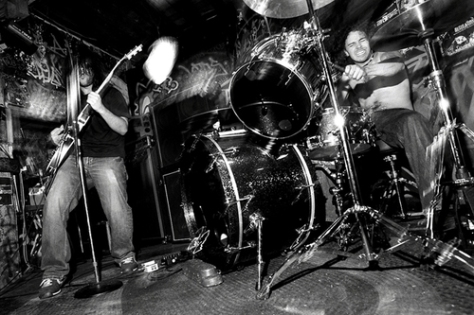 Since coming to university I have been lucky enough to meet people with a vast range of music tastes and loves. Some of the bands I’ve been introduced to have been absolutely terrible, but there have been a few fantastic diamonds in the rough. One such example is Black Cobra, a stunning two piece that put the likes of the White Stripes to shame, with a sound akin to that of being punched in the face repeatedly by Joe Calzaghe. After seeing them at the Underworld in London, I decided to learn a little bit more about Jason Landrian and Rafael Martinez’s pet project.

How did you two form Black Cobra, and what were your aims in doing so?

We formed Black Cobra in 2002. Jason [Landrian, guitarist and vocals] was living in New York and I was living in Los Angeles. We had known each other from Miami Dade Community College in Florida so we kept in touch throughout the years. Our aim was to create music we wanted to hear and play.

I was introduced to you guys via a friend who’s taste in music is anything but accessible. A lot of what he recommends I really struggle to get into, but having listened to Bestial a few times it’s really grown on me. Do you find the accessibility of your music to be a bit of a hinder sometimes, and find that people don’t give you enough of a chance?

It depends, many times people know what genre we are so they have an idea of the nature of our music but other times people find it hard to digest right off the bat. We don’t feel it’s a hindrance at all.

What would you say to those who don’t consider this kind of thing music?

What inspired you to begin making this music? Are there any bands or artists in particular who motivate you personally?

From playing in our previous bands Cavity and -16 –, we were exposed to a certain style of hardcore and metal which had a big impact on our style and approach towards heavy music. Some of the artists that motivate us include Iron Maiden, Harvey Milk, Ennio Moricone, and Jimi Hendrix to name a few.

Jason, how do you manage to coax that bellowing growl out of your vocal chords? Have you ever run into any problems vocal-wise?

It was a lot of experimentation with vocal techniques and it eventually developed into what we have now. No problems as of yet.

For only two members, with just a guitar and a drumkit, you make a shitload of noise. What’s the working relationship between you two like? Is it easier to compose songs with fewer members to dilute the original ideas?

Having only two instruments has challenged us to approach our writing in a more strategic fashion by maximizing the usage of our instruments and the equipment.

I’ve also read that, in your early days, you had quite an interesting method of piecing together your songs by emailing riffs to each other. Although I doubt you work like this today, how did you find this method of literally trading off each other? How do you feel it affected the music that came out of it?

It forced us to work at a slower pace than what most bands are used to. We would write the basic structure of some of the songs and we would listen to them sporadically. Here and there we would make changes, with sometimes weeks, of elapsed time before we would continue to work on them. This process was very interesting and also different from anything we had ever been involved with. We don’t feel it hindered the process, in fact it allowed us ample time to make all the necessary changes we wanted until we were satisfied.

You released two albums last year, Bestial and Feather and Stone. Are Black Cobra going to be quite as prolific this year?

Due to our heavy touring schedule we won’t be putting out an album this year.

Live, they are an unstoppable force, a show of pure sweat, energy and noise.

You recently came over to the UK supporting The Sword, how did that go?

It was a great experience touring with The Sword and Saviours! We have been there twice before and it’s been getting better and better every time.

Are there any plans to return to the UK in the near future?

We would love to return to the UK this year but as of right now we have no plans. However, we are touring Europe with Saviours in May and June.

As music artists you are intrinsically embroiled into the heated debate over record labels, music piracy and the relevancy of physical media to today’s music buying generation. Have you ever thought about where the music industry is heading as a whole, and does it concern you?

We have witnessed for the past couple years that the world of independent music has been growing consistently. Underground metal specifically has always depended on live shows and it doesn’t seem like it’s going to change anytime soon. We have been able to continue touring because more and more people are showing up at the shows from increased exposure of our music scene.

What are your plans for the future?

To continue touring and releasing albums.

Once again, thanks for letting me pick your brains, and best of luck for the future. I’m hoping to see you guys come back to the UK very soon!

As they said, Black Cobra will be touring around Europe in the next few months, so if you have the chance to go see them then it’s definitely one you do not want to pass up. If you’re a fan of Boris, Goatsnake or the brilliantly named Indomitable Iron Sloth then Black Cobra are sure to be right up your street.