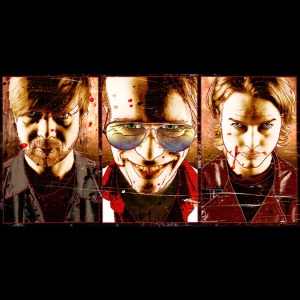 Dundee’s Fat Goth have returned with the bold promise to probe the issue of sex in their own tongue in cheek (yes, cheek) manner that has served them so well since their debut in 2010.

The trio have no shame of their debt to the likes of The Melvins and The Jesus Lizard (in fact the latter’s David Yow put pen to paper to create the three blood-splattered portraits that adorn the front cover of One Hundred Percent Suave). Previous records have seen the band embracing their razor-sharp sense of humour, but there’s a definite sense that the no-pants dance subject matter has brought out a debauched side of Fraser Stewart, Mark Keiller and Kevin Black.

Where last year’s Stud dabbled in a mix of genres, including surf rock, Suave is more consistent in paying tribute to the likes of Mike Patton and Mclusky. It’s a record that shudders the bedframe more-or-less relentlessly. Opening track ‘*disclaimer’ is a sarcastic take on a Faith No More album track, followed up with the lets-get-down-to-business fury of ‘Sweet Mister Scary’, where frontman Stewart exhibits a remarkable swagger and effortless bravado on the microphone.

For the majority of Suave, Stewart’s voice is forceful and in your face. ‘Sin Alter’ rumbles like an impromptu alleyway scrap beneath the watchful eyes of smashed CCTV cameras. Everything is laced with a sheen of sleaze, and a lot of that comes from Stewart’s uninhibited groans and growls as he works his lustful lyrics around a spittle-covered microphone. It is – at times – genuinely uncomfortable, like innocently turning up at a dinner party organised by your boss, only to be told upon entering to throw your car keys in a floral-printed bowl.

That dirty atmosphere is oppressive yet addictive, reaching its peak in the sub two-minute seedy rumbling of ‘Lower Pleasance’, a hallucinogenic trip through the murky scenery of a Nicolas Winding Refn film. If it doesn’t leave you feeling grimy by its conclusion, I have no interest in traipsing through your Internet history.

But Suave concludes with ‘Caligynephobia’; a term which, ironically, means to have an irrational fear of beautiful women. All the pent up aggression that Fat Goth’s explorations into bumpin’ uglies has generated dissipates into seven minutes of guilt-racked sobering up. There’s shame and disappointment in this conclusion, as if the bluster Stewart has exhibited reveals itself to be nothing more than a smokescreen for a raft of troubling insecurities. It’s a bittersweet ending, one that reveals a more delicate but no less unhinged side to the shabs-and-bants domination of what precedes it.

One Hundred Percent Suave is a solid effort from the Dundonians, although it lacks the surprises and experimental musical tangents that made their former records so mind-meltingly puzzling to get your head around. It’s more of a fleeting affair than a long-lasting relationship, and the kind that reminds you of former exciting trysts that you’ve since spent your whole life trying to replicate.

Originally published on The Line of Best Fit.