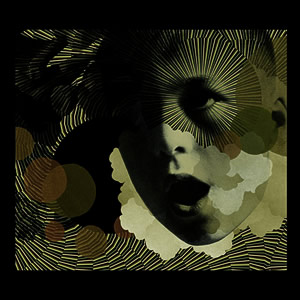 Before things get started, first things first – I’ve never read a more pretentious press release from a band in my life. I mean, these things are made to sell the band in any way possible and usually come across as desperate attempts at making them sound like Jesus’ second coming, but Mothlite have taken the crown here. Three lengthy paragraphs about the industrial revolution and a butterfly that changed its camouflage only brought one thought into my mind – this is going to be so shit.

You can imagine my surprise when ‘Riverside‘ started the album and it was (shock, horror) good. Its ticklish guitar opening and slow driven bass push the song along to a triumphant apex, layers of sounds and vocals laid above each other to a dramatically soothing effect. Despite the abstract ideas and ridiculous inspirational story behind the album, Mothlite have actually remembered to make music that towers high above the ostentatious airs.

Despite his musical credentials including a fundamental role in Guapo and participating in one of the most shockingly tedious bands ever in Sunn O))), Daniel o’Sullivan has managed to move away from the oppressive nature of these bands and create something a lot lighter with Mothlite. Ok, so it may not be Weezer singalongs, but throughout the album there’s a tender delicacy that is more beautiful than monotonous.

His talent at the ivory keys is prominent, with haunting melodies that help create a rather sinister ambiance revolving around the listeners head, and these twinkles become a bedrock as vocals, clarinets, saxophones and drums are constructed around the piano.

The three longer tracks on the album, clocking in at just over ten minutes each, somehow never really become too long to the point of tedium. The variation and brief glimmers of light amongst the dark keep you attached to the music, never allowing it to grow stale or too bleak. ‘The Untouched Dew‘ is gloomy, with a sullen background that slowly metamorphosis’s into a brace of hopeful strings and voices that reminds you of Sigur Ros. It’s a piece that is so desolate, and yet at the same time holds a glorious aspiration.

So, despite the outrageous claims on the attached press release that compare the music to the Stan Brakhage film of the same name as the band, The Flax of the Reverie actually proves itself to be a surprisingly gratifying album that is perfect for reflective moods and peaceful minds.

This review is also published over at Sonic Dice.

One thought on “Album Review: Mothlite – The Flax of the Reverie”